For better or worse: Power Mac G5, meet Australis. (Oh, pick him up off the ground, please, he crashed again.)

After a lot of sweat and screaming this weekend, I am relieved to state that Australis can be coerced to build and start on 10.4, and even do some basic browsing. Meet the very embryonic TenFourFox 29. 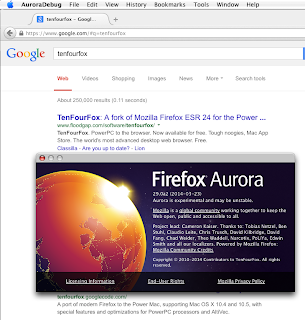 Unfortunately, right now it's hideously buggy. Issue 247, a known bug with personas where the traffic light buttons disappear at times, is prominent in every window. I'd assimilate this as a feature except that it sometimes will partially paint them and sometimes not at all, so we'll have to find something that makes it better. The background colour of the window is wrong, too; it always appears inactive, so the tabs look like they're not attached to anything. Icons in the menus look totally screwed up though they appear properly in the main window, and it also has random crashes on some web pages that look like an interaction with the font code we had to hack. But it does build, it does link, and the chances of there being a TenFourFox 31ESR are now better than even money. Once the browser is halfway stable, I'm going to pull the beta and rewrite the changesets. (Ignore the Aurora livery; we don't have special TenFourFox livery for aurora builds since we rarely issue them.)

Linux users, my success is bad news for you, however: this means that bug 961488 which is preventing Firefox from running on Linux/ppc32 is Linux-specific (and possibly affects *BSD as well) because I didn't trigger it in TenFourFox. Hopefully one of you figures it out. I left a place to start looking in that bug.

While I've only used it briefly I'm pleasantly surprised to note that it doesn't perform badly, considering, since this is a debug build and only trivially optimized. It's obviously much more wasteful of screen real estate than 24, but this is what we have to live with, and there are themes to revert it for those of you who already know you won't like it. Personally, I don't like it either (on my 10.6 machine as well) because it smacks of Chrome and it's a bit gauche, but I can live with it, and there are admittedly some nice things about it.

One final note of concern: there is a problem looming on the horizon, and it's another issue with our linker (issue 266); once again, Mozilla has overbloated XUL to the point where it won't link with our tools. The offender appears to be the newly-enabled International Components for Unicode support (which isn't in 24; this doesn't have anything to do with localization per se), which increases XUL by 10-20MB and makes the linker run out of room to link branches together. Mozilla does not install ICU support on Android or FirefoxOS, which is fortunate because therefore they must allow building without it and it's not likely it will be mandatory for Firefox 31ESR either, but we'll have to deal with the problem sooner or later because other future features might bulk the browser up too. If we can't link the browser, we can't build the browser, and we'd have to drop source parity.

Speaking of FirefoxOS, I did get it installed finally on the Geeksphone Revolution, which I have since christened the Revulsion because it sucks. In spite of the lousy hardware, however, FirefoxOS isn't bad at all; I'll have a review blog post up later this week. Still waiting for one last tool to do the service work on the G5, which I will also write up since I know some of you have asked about that too.

Posted by ClassicHasClass at 7:24 PM