Ten years of the Twentieth Anniversary Macintosh ... or something (plus: try MTE v2)

The Twentieth Anniversary Macintosh still doesn't know what to make of this: 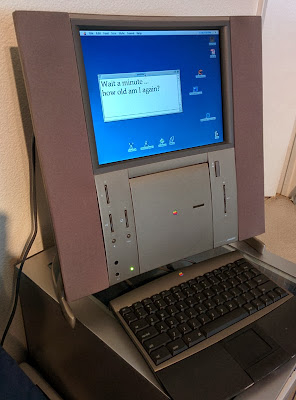 And yes, today is indeed the 30th anniversary of the original Macintosh Super Bowl big game ad, for those of you hiding out under a rock for the last several decades. Apple did a retrospective video for apple.com, which because they used a weird manner to do it, is not compatible with the QTE. However, here are the low bandwidth and high bandwidth versions (QTE users can right click and select "Open Link in QuickTime" to play the movie). While much of it is the usual Apple equals sex design twaddle, the following classic and vintage Macs are featured, in order of appearance: the original 128K (of course), the Macintosh XL (presumably standing in for the Lisa), the Macintosh II, the Macintosh Portable, the Macintosh LC, the PowerBook 100, a Quadra 9x0 (either a 900 or a 950, amusingly lacking the key), a Color Classic, a Power Macintosh 8500 or 9500, a Macintosh SE/30 (called SE 301, with an FWB hard drive icon), a Twentieth Anniversary Macintosh (mine is better), a tower beige Power Macintosh G3, a Bondi Blue iMac G3 (the machine that arguably saved Apple), a graphite Power Mac G4 (either a Yikes! or a Sawtooth), a Blueberry iBook G3, a Titanium PowerBook G4, a 15" iMac G4, a 14" iBook G4, and finally the Power Mac G5. After that is all the Intel rot. But it's fun to see the creative luminaries assembled for this well-produced short, and of course the return (however briefly) of the rainbow Apple logo we all loved back when: 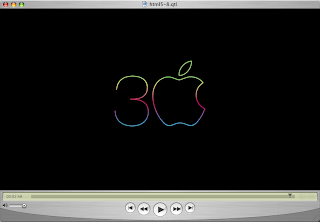 For the record, I own about 2/3rds of the featured pre-Intel Macs; the first Mac I used was my friend's dad's Mac Plus, and the first Mac I personally owned was a IIsi. And, btw, as a physician the scene of an iPad over a sterile surgical field near the end makes me shudder.

No one has indicated serious intestinal distress over the highly automated way I've taken the new MacTubes Enabler, so you can download a prototype and try it. Here's an appropriate one: the Apple 1984 Super Bowl big game ad. As a bug I've subsumed as a feature (I think this is a glitch in the Add-on SDK), if you search for a video in YouTube and go to it from there, the video plays in the browser, so you can still interact with the (puke) comments and (gag) other users. But if you click on a YouTube URL anywhere else, or you cut and paste a YouTube URL into the address bar, it automatically opens in MacTubes and goes back to what you were doing. If the URL opens in a new tab, the tab automatically closes. Try it. I like it.

Posted by ClassicHasClass at 12:23 PM 15 comments:

IBM, MacTubes, monkeys and morons (plus: Quake is better in OS 9)

UPDATE: IBM sold the entire x86 server line to Lenovo after all, for a billion less than Google paid for the Nest.

About eight months ago, your faithful chronicler reported IBM, developers of the POWER architecture from which PowerPC descended, was trying to exit the x86 server business and sell it to Lenovo. As I mentioned in that article, margins are thinning on x86 servers, especially as companies like Google and Facebook build their own bespoke devices (Google has even looked at designing its own POWER and ARM processors), and IBM has never liked being in low-margin markets just as Apple doesn't. Well, looks like that foundered and IBM is shopping the business to Dell. Either way, IBM really wants out and I think you'll see the bottom fall out of the commodity x86 rackmount market, leaving the low-margin no-name companies to struggle for that money while the big corporations like Oracle and IBM continue to produce their proprietary RISC lines. (That must alarm Hewlett-Packard, which is stuck on Itanium with its clouded roadmap having jettisoned PA-RISC long ago. I have a fondness for PA-RISC since my first job out of college was working on a HP 9000 K-Class.) As I mentioned in the previous article, it's good news for POWER in general, since this makes it a bigger proportion of IBM's product portfolio and ensures its continued evolution even if it is gradually disappearing from the mass consumer market.

I've been playing with the next release of the MacTubes Enabler, which a number of you are already using. Since YouTube pages are only getting heavier and our computers aren't getting any faster, my current idea is to completely avoid making the browser do the work of loading the page so that you can labouriously click through the context menu to start MacTubes -- it should just hand the URL right off and halt the load so you can go back to what you're doing. And that's what it does: when a YouTube video URL is detected, it automatically fires up MacTubes and then either backs up to the previous page or closes the tab if it was a new tab like a program passing your browser a URL. In fact, if you visit any YouTube video page, the switchover occurs automatically, though things like the YouTube search are still within the browser (I figure you're doing that on purpose if you're not using MacTubes for the actual search portion). Embedded videos can be played if they properly include the embed code that has a link to the video -- you click the link and MacTubes starts, easy as that. You can still play an embedded video in WebM directly in the browser. If you use the QuickTime Player mode in MacTubes, you should be able to get HD videos and download them directly from the client.

So far this approach seems to be working well and it's nice that it's totally automatic. Please note that I haven't tested this with any tab-management addons, but this is using Mozilla's Add-on SDK for tab control, so it's not doing anything it shouldn't be. If anyone has objections, voice them in the comments; if people like how the idea sounds, I'll release that as the next version of the MTE in a couple of weeks.

IonMonkey PowerPC has progressed to the point where it can now compile and run loops in JavaScript, which particularly for floating point operations execute dramatically faster than the current PPCBC compiler (as expected). Memory usage is higher, but that is expected too; although function calls are still problematic, I have some ideas about how to fix this. I'm hoping to have a beta for IonMonkey for either 29-aurora or 31-aurora. If we make it to Fx31, I want IonMonkey to be ready by then as a marquee feature.

In other news, the morons at Google Code has shut down new downloads as threatened. Please extend your middle fingers in salute to this policy. All further uploads, including localization packs, will be on SourceForge; historical downloads will remain on Google Code "while they last." The transition to SourceForge is complete for file hosting, and we'll see what happens with the rest of it.

Finally, for you classic Mac OS gamers, I had some friends over for a good-old-fashioned LAN party so we could kill each other in Quake. We chose the original Quake because it has little network demand (particularly on modern networks), the same protocol works on Mac OS 9 and I have many OS 9 machines (this was a problem with Quake III Arena, where ioquake3 and the official id software Mac OS 9 compatible version use different network protocols), and you can get it hardware-accelerated with GLQuake for both OS X and OS 9. Our initial idea was to have the G5 be the Quake server, but GLQuake X crashed randomly and repeatedly during game play, greatly preventing me from firing rockets into my beloved friends' visceral cavities. So, just to see what would happen, I assigned server duties to the Power Mac 7300 running OS 9.1 (with 1GB RAM, a G4/800 Sonnet upgrade card and an ATI Rage Orion 3D accelerator). It never crashed for the hours of game play after that. Maybe GLQuake X is glitchy on 10.4, maybe it was some process on the G5, but if you want a solid Quake (or probably even Quake II) server, a reasonably-specced OS 9 machine did the trick for us. Go Classic go!

Posted by ClassicHasClass at 12:22 PM 11 comments:

My New Year's Resolution is to fix IonMonkey ...

... and ask Scarlett Johansson out on a date. Fortunately, I have made progress on the more realistic goal of the two:

Like our initial victory with PPCBC, this is the simplest of simple JavaScripts. But it proves the basic machinery for IonMonkey optimized JavaScript compilation is now, finally, working. A very ugly hack was required that should stick for the time being. Meanwhile, we will move on to more complicated scripts and fill in the holes in the code generator that I know are not correct.

Of course, the moving target that is the JavaScript JIT compiler in Firefox is moving again. Mozilla is unhappy with the slow, nay, nonexistent pace of progress on YARR, the regular expression library used in Firefox/TenFourFox imported from WebKit. At least one suggestion that has legs is to switch to V8 irregexp, the regular expression library used in V8 imported from Google Chrome. irregexp is pretty fast, but it means yet another macroassembler to write, and more importantly it means the Nitro macroassembler we use now for both YARR and (underlyingly) PPCBC would be removed and we'd have to actually write two new backends just to restore the level of JIT function we have now. Understandably I am less than thrilled with this possibility even though the work would not be excessively difficult; it would just be tedious and delay my porting activities further. I'm hoping Mozilla develops their own regex and bases it on the existing infrastructure so I'd only have to port our underlying code generation once when they get rid of Nitro. Fortunately this is not likely to be consummated in any meaningful way much before Firefox 31.

Don't even get me started on asm.js, by the way. That's waaaay down on the priority list.

24.3.0 is scheduled for 4 February, at which time the assault on 29 and Australis will begin. By the way, does anyone have Scarlett's phone number? Asking for a friend.

Posted by ClassicHasClass at 9:50 PM 2 comments: