TenFourFox 38.10.0 is now available for testing (downloads, hashes, release notes). This brings TenFourFox 38.x to security parity with 45.3; again, if you are using our patches downstream, keep in mind I only backport the security fixes relevant to our standard configuration. As always, it becomes the release version Monday evening Pacific.

I'm still trying to investigate what's wrong with Amazon Music in TenFourFox 45, but everything else appears to be working. Watch for beta 1 later this week regardless.

Also, this makes me happy. Its name is Eric.

Posted by ClassicHasClass at 8:54 PM 3 comments:

And now for something completely different: Join me at Vintage Computer Festival XI 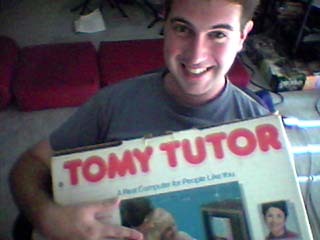 A programming note: My wife and I will be at the revised, resurrected Vintage Computer Festival XI August 6 and 7 in beautiful Mountain View, CA at the Computer History Museum (just down the street from the ominous godless Googleplex). I'll be demonstrating my very first home computer, the Tomy Tutor (a weird partial clone of the Texas Instruments 99/4A), and its Japanese relatives. Come by, enjoy the other less interesting exhibits, and bask in the nostalgic glow when 64K RAM was enough and cassette tape was king.

I'm typing this in a G5-optimized build of 45 and it seems to perform pretty well. JavaScript benches over 20% faster than 38 due to improvements in the JIT (and possibly some marginal improvement from gcc 4.8), and this is before I start doing further work on PowerPC-specific improvements which will be rolled out during 45's lifetime. Plus, the AltiVec code survived without bustage in our custom VP8, UTF-8 and JPEG backends, and I backported some graphics performance patches from Firefox 48 that improve throughput further. There's still a few glitches to be investigated; I spent most of tonight figuring out why I got a big black window when going to fullscreen mode (it turned out to be several code regressions introduced by Mozilla removing old APIs), and Amazon Music still has some weirdness moving from track to track. It's very likely there will be other such issues lurking next week when you get to play with it, but that's what a beta cycle is for.

38.10 will be built over the weekend after I'm done doing the backports from 45.3. Stay tuned for that.

Posted by ClassicHasClass at 9:36 PM 3 comments:

Email ThisBlogThis!Share to TwitterShare to FacebookShare to Pinterest
Labels: anfscd

TenFourFox 45 is more of a thing

Since the initial liftoff of TenFourFox 45 earlier this week, much progress has been made and this blog post, ceremonially, is being typed in it. I ticked off most of the basic tests including printing, YouTube, social media will eat itself, webcam support, HTML5 audio/video, canvas animations, font support, forums, maps, Gmail, blogging and the major UI components and fixed a number of critical bugs and assertions, and now the browser is basically usable and able to function usefully. Still left to do is collecting the TenFourFox-specific strings into their own DTD for the localizers to translate (which will include the future features I intend to add during the feature parity phase) and porting our MP3 audio support forward, and then once that's working compiling some opt builds and testing the G5 JavaScript JIT pathways and the AltiVec acceleration code. After that it'll finally be time for the first beta once I'm confident enough to start dogfooding it myself. We're a little behind on the beta cycle, but I'm hoping to have 45 beta 1 ready shortly after the release of 38.10 on August 2nd (the final 38 release, barring a serious showstopper with 45), a second beta around the three week mark, and 45 final ready for general use by the next scheduled release on September 13th.

A couple folks have asked if there will still be a G3 version and I am pleased to announce the answer will very likely be yes; the JavaScript JIT in 45 does not mandate SIMD features in the host CPU, so I don't see any technical reason why not (for that matter, the debug build I'm typing this on isn't AltiVec accelerated either). Still, if you're bravely rocking a Yosemite in 2016 you might want to think about a G4 for that ZIF socket.

I've been slack on some other general interest posts such as the Power Mac security rollup and the state of the user base, but I intend to write them when 45 gets a little more stabilized since there have been some recurring requests from a few of you. Watch for those soon also.

Posted by ClassicHasClass at 9:51 PM 4 comments:

TenFourFox 45 is a thing

The browser starts. Lots of problems but it boots. More later.
Posted by ClassicHasClass at 1:21 PM No comments:

Did Juno is a PowerPC?

Congratulations to NASA's Juno space probe team, which is now successfully in orbit around Jupiter. When you want radiation-hardened CPU designs (to guard against naughty things like cosmic rays flipping bits and zapping traces), you want BAE's RAD series, and that means you want ... PowerPC. Yes, Juno's brain is a lowly RAD750 running at 200MHz, essentially a beige Power Mac G3 with cojones of pure lead. It has 128MB of the baddest, meanest, toughest DRAM there is and 256MB of flash on board with a system bus providing 100Mbps of instrument bandwidth for pure awesome. The radiation around Jupiter, due largely to its intense magnetic fields acting essentially like gigantic particle accelerators, will expose the probe to the equivalent of a human getting 100 million dental X-rays in the course of a year (for me, that year was 6th grade); to enable it to survive its two year mission, NASA has encased the CPU and other critical components in a titanium box a third of an inch thick.

Remember: when you absolutely have to get to Jupiter, choose PowerPC. (Heck, Mars too.)

Posted by ClassicHasClass at 7:50 AM 5 comments:

TenFourFox 45 is about 30% merged so far. I've been able to streamline a few changesets and cut out some others, which is mostly a feel-good futile move since 45 is the last changeset merge I'll have to do personally, but so far it's an easier port than 43 was and I've probably just jinxed myself saying so. Nevertheless, the target for beta 1 in mid-July still stands so far and 38.10, hopefully the final release of TenFourFox 38, is scheduled for August 2. After that the target is for 45.4 to reach release in September.

Once 45 hits release and 38 is retired, we'll start the old unstable builds up again for new features (i.e., feature parity). My plan is one new functionality improvement and one new optimization each cycle, with 6-12 week cycles for baking due to our smaller user base. You'll get some clues about the user-facing features as part of tenfourfox.dtd, which will be pre-written so that localizers can have it done and features can just roll out as I complete them.

On to other things. Mozilla announced yesterday the (very preliminary) release of the Servo Developer Preview, using their next-generation Servo engine instead of the Gecko engine that presently powers Firefox (and TenFourFox). Don't get your hopes up for this one: Servo is written in Rust, Rust needs llvm (which doesn't work yet on OS X/ppc, part of the reason we're dropping source parity), and even the extant PowerPC Rust compiler on Linux may never be capable of building it. This one's strictly for the Intel Mac lulz. 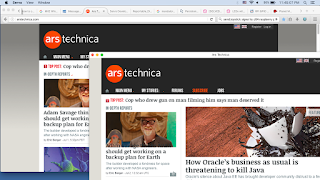 Servo's interface is very sparse, but novel, and functional enough. I'm not going to speak further about that because it's quite obviously nowhere near finished or final. It works well enough to test and I wasn't able to make the browser crash in my brief usage. Thumbs up there.

With regard to the layout engine, though, many things don't work. You can see several rendering glitches immediately on the main page with the gradient and font block backgrounds. Comment threads in articles appear crazily spaced. Incidentally, I don't care if you can see my browser tabs or that I'm trying to figure out how to interface a joystick port to a Raspberry Pi (actually, it's for a C.H.I.P., but the Pi schematics should work for the GPIO pins, as well as whatever's needed to connect it to 5V logic). 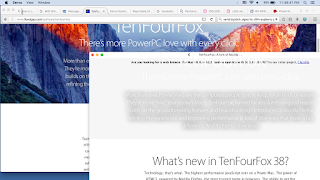 The background is missing and the top Classilla link seems to have gotten fixed to the top. On the other hand, the Help and Support Tab does load, but articles are not clickable and you can't pick anything from drop-down select form elements.

Now, I'll admit this last one is an unfair test, but Floodgap's home page is also pretty wrecked: 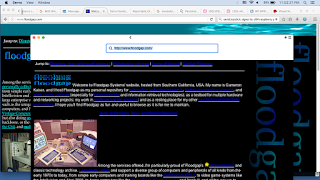 This is an unfair test because I intentionally wrote the Floodgap web page to be useable and "proper" as far back as Netscape Navigator 3, festooning it with lots of naughtiness like <font face> and other unmentionables that are the equivalent of HTML syphilis. Gecko handles it fine, but Servo chokes on the interlaced GIFs and just about completely ignores any of the font colour and face stuff. But I wasn't really expecting it to do otherwise at this stage; no doubt quirks mode is not currently a priority.

I think the best that can be said about this first public release of Servo, admittedly from my fairly uninformed outsider view, is that it exists and that it works. There was certainly a lot of doubt about those things not too long ago, and Mozilla has demonstrated clearly with this release that Servo is viable as a technology if not yet as a browser. What is less clear is what advantages it will ultimately offer. Though the aim with Servo is better performance on modern systems, especially systems with cores to burn, on this 2014 i7 MacBook Air Servo didn't really seem to offer any speed advantage over Gecko -- even with the understanding this version is almost certainly unoptimized, right now Gecko is rather faster, substantially less buggy and infinitely more functional. It's going to take a very long time before Servo can stand on its own, let alone become a Gecko replacement, and I think in the meantime Mozilla needs to do a better job of not alienating the users they've got or Servo-Firefox will remain a purely academic experiment.

Meanwhile, I look forward to the next version and seeing how it evolves, even though I doubt it will ever run on a Power Mac.

Posted by ClassicHasClass at 12:11 AM No comments: