And now for something completely different: An Outbound Notebook resurrected

It surprises people to know that there were authorized non-Apple Macintoshes, and not just the infamous Power Mac clones during the Spindler-Amelio years (or the notoriously overhyped NuTek machines, which tried to get around Apple by reverse-engineering the Mac OS, and not with much success). The most interesting of these were probably the early portables prior to the PowerBook 100, which was a true revolution and ended up eating everybody's lunch (and put most of these companies out of business). Until then these machines had the market all to themselves, even (or especially) when Apple brought out the 16-pound Macintosh Portable, which was big and dumb and today a collector's item but sprawled across most of a desk and gave people hernias just by looking at them.

The 68K laptop manufacturers got around Apple's (later well-founded) clone phobia by importing various components from functioning Macs sold at retail or licensing the chips; some required lobotomizing an otherwise functional machine for its ROMs or even its entire logic board, though at these machines' cheaper price point it was probably still worth it. The big three companies in this particular market were Colby, Dynamac and Outbound. Colby made the WalkMac, which was smaller than the Portable but not much lighter, and required either an SE or SE/30 motherboard. Still, it sold well enough for Sony to threaten to sue them over the Walkman trademark and for Chuck Colby to even develop a tablet version based on the Mac Classic. Dynamac's two models used Mac Plus motherboards (which Apple would only sell to them as entire units, requiring Dynamac to pay for and dispose of the screens and cases they never used), but the EL variant was especially noteworthy for its distinctive 9" amber electroluminescent display.

However, my personal favourite was Outbound. The sprightly kangaroo logo on the case and on the boot screen made people think it was an Australian company (they were actually headquartered in Colorado), including my subsequently disappointed Aussie wife when I landed one for my collection. Outbound distinguished themselves in this market by developing their own logic boards and hardware and only requiring the ROMs from a donor Mac (usually an SE or Plus). Their first was the 1989 Outbound Laptop, which was a briefcase portable not unlike the Compaq Portables of the time, and running at a then-impressive 15MHz. The keyboard connected by infrared, which causes a little PTSD in me because I remember how hideous the IBM PCjr's infrared keyboard was. However, the pointing device was a "trackbar" (trademarked as "Isopoint"), a unique rolling rod that rolled forward and back and side to side. You just put your finger on it and rolled or slid the rod to move the pointer. Besides the obvious space savings, using it was effortless and simple; even at its side extents the pointer would still move if you pushed the bar in the right direction. The Outbound Laptop also let you plug it back into the donor Mac to use that Mac with its ROMs in the Outbound, something they called "hive mode." Best of all, it ran on ordinary VHS camcorder batteries, which you can still find today, and although it was a bit bulky it was about half the weight of the Mac Portable. At a time when the Portable sold for around $6500 it was just $3995.

In 1991 Outbound negotiated a deal with Apple to actually get ROMs from them without having to sacrifice another Mac in the process. They used these to construct the Outbound Notebook, which of the two (today rather rare) Outbound machines is easily the more commonly found. The first model 2000 used the same 68000 as the Laptop, boosting it to 20MHz, but the 2030 series moved to the 68030 and ran up to 40MHz. These could even take a 68882 FPU, though they were still limited to 4MB RAM like the Laptop (anything more was turned into a "Silicon" RAM disk supported by an included CDEV). They featured a very nice keyboard and the same innovative trackbar, also took VHS camcorder batteries, and folded to a very trim letter size dimension (about 2" thick) weighing just over six pounds. Thanks to its modular construction it could even be upgraded: the RAM was ordinary 30-pin SIMMs attached to a removable CPU daughtercard where the ROMs, FPU and main CPU connected, and the 2.5" IDE hard drive could also be easily removed, though Outbound put a warranty sticker on it to discourage third-party replacements. For desktop use it had ADB and the $949 Outbound Outrigger monitor plugged into the SCSI port to provide an external display (yes, there were SCSI video devices).

Unlike the other Mac clones, the Outbound Notebook was a serious threat to Apple's portable line at the time. Even though the contemporary PowerBook 100 was rather cheaper ($2300 vs the 40MHz 2030V at $3500) and could take up to 8MB of RAM, it was still the 16MHz 68000 of the Portable era because it was, in fact, simply a miniaturized Mac Portable. Only the simultaneously-introduced PowerBook 170 was anywhere near the same performance ballpark (25MHz '030) as the Notebook, and it was $4600. Apple decided to adopt a contractual solution: while the agreement compelled Apple to still offer SE ROMs to Outbound, they were not similarly obligated to sell ROMs from any later model, and thus they refused and in doing so put an end to the development of a successor. Deprived of subsequent products, Outbound went out of business by the end of 1992, leaving the machines eternally stuck at 7.1.

A couple years ago I picked up a complete 33MHz '030 Outbound Notebook system from a sale, even coming with a small dot matrix printer and the official Outbound car charger (!). Some of you at the Vintage Computer Festival 2017 saw this machine as a terminal for my Apple Network Server 500. It was a bit yellowed and had been clearly heavily used, but worked pretty well right up until it didn't (eventually it went to a garbage screen and wouldn't enter POST). I put it back in the closet for a few months in Odinsleep until an "untested" unit showed up on eBay a couple weeks ago. Now, keep in mind that "untested" is eBay-speak for "it's not working but I'm going to pretend I don't know," so I was pretty sure it was defective, but the case was in nice condition and I figured I could probably pull a few parts off it to try. Indeed, although the kangaroo screen came up, the hard drive started making warbling noises and the machine froze before even getting to the Happy Mac. I put in the hard disk from my dead unit and it didn't do any better, so I swapped the CPU cards as well and ... it booted! 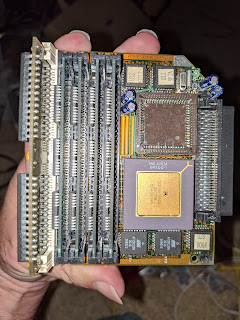 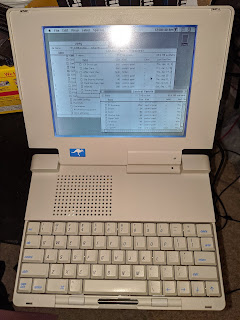 At 33MHz System 7.1 flies, and it has Connectix Compact Virtual (the direct ancestor of RAM Doubler), which at the cost of disabling the Silicon Disk gives me a 16MB addressing space. At some point I'll get around to configuring it for SCSI Ethernet, another fun thing you can do over SCSI that people have forgotten about.

Besides the case, floppy drive and trackbar, the keyboard was also in excellent condition. Let's compare it with what I think is the best keyboard on any Apple laptop past or present, the PowerBook 1400: 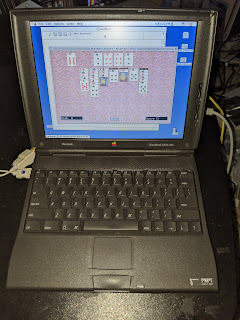 This is my personal PowerBook 1400 workhorse which still sees occasional use for classic software. The 1400 was my first Mac laptop, so I'm rather fond of them, and I have a stack of them for spare parts including my original 117cs. This one is almost maximally upgraded, too: it has a Sonnet 466MHz G3, 64MB of RAM, a 4GB IDE drive, Ethernet and modem PCMCIA cards and the Apple 8-bit video card. All it needs is a 16-bit video card and the solar cover (it just has the interchangeable inserts), and it would be the envy of all who behold it.

The 1400 has the keyboard against which all Mac laptops are measured because of its firmness, key travel and pre-scissor construction. It isn't quite as long travel as the IBM ThinkPads of the era, but it easily exceeds any other Apple laptop keyboard then or now, and is highly reliable and easily replaced if necessary (mine has never been necessary). The Outbound's keyboard is a bit stiff by comparison but has decent travel and is less mushy than my other 68K PowerBooks (or for that matter even my iBook G4). While the Portable's keyboard is nice and clicky, it's practically a desktop keyboard, so it's cheating. Score another one for the clone.

For that matter, the 1400 and the Outbound have another thing in common: surprising modularity. Like the Outbound, the 1400's CPU is on a removable daughtercard behind just a couple screws, and the hard disk and RAM can be upgraded easily (though the 1400's wonky stacked RAM system can sometimes be mechanically fraught with peril). It's just a shame it has a custom battery instead of an off-the-shelf one, but that's Apple for you. Neither of them have an easily accessed logic board but that's hardly unusual for laptops. I'm just glad the logic board on this unit was working, because it's nice to have the Outbound revived again for more good times. It's a great historical reminder that sometimes the best Macintoshes didn't come from Cupertino.

Posted by ClassicHasClass at 10:27 PM