And now for something completely different: Way more FPS than Counterstrike on PowerPC DOSBox 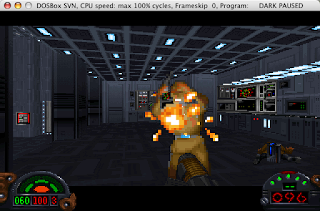 If you're unfamiliar with it, DOSBox is an x86 emulator specializing in running PC DOS games (and, presumably, any PC DOS application). For many DOS-based titles, in fact, it may be the only way to run them on modern PCs, let alone Macs. Besides emulating old hardware like video cards and SoundBlasters sufficiently for games to run, one of its key features on supported platforms is dynamically recompiling x86 machine language for enhanced performance. Unfortunately, DOSBox on Power Macs, while it is still supported as of this writing (10.4 and up), runs x86 code strictly in an interpreter and as a result can be quite slow on low-spec systems. For certain games requiring 80486-level performance, only the G5 can realistically emulate those at any reasonable level, and even then uses a lot of CPU doing so or requires skipping some portion of frames to make the game at all playable.

Over on Vogons earlier this year one of the DOSBox contributors wrote up a PowerPC JIT for the dynrec core under Linux which was then ported to OS X. Like the TenFourFox JIT compiles JavaScript to PowerPC machine code, this patch compiles x86 machine code to PowerPC machine code and runs that instead of requiring labourious interpretation. There was briefly a build available on Dropbox with this JIT, which is currently not part of the DOSBox source tree, but that build can no longer be downloaded. So, I went ahead and reconstructed it against the current trunk (at the time I pulled it, r4301) along with a minor tweak and another of this developer's big-endian fixes, and have tidied it up for download.

To give you an idea of the improvement, I have a few DOS games I enjoy that were never ported to Mac (along with LucasArts' Dark Forces, shown here, which has an outstanding Mac port with up to double the resolution of the DOS version but only runs in Classic). On this Quad G5 set to Reduced performance, with interpreted mainline DOSBox I usually had to have it skip every other frame. This made games like Commander Keen in Goodbye, Galaxy!, Pinball Illusions and Extreme Pinball playable, but only just so, and also made the animation sadly a bit jerky. Even with this handicap some games were still unplayable unless I turned the machine to Maximum performance (and cooked the room), and even then Dark Forces and Death Rally usually ranged from stuttery to slideshow. With the JIT enabled, not only could I get rid of the frame skip entirely -- even in Reduced performance -- but all of the games became absolutely playable. In Maximum performance they run better than my real 486 DOS games box.

Explaining how DOSBox works is beyond the scope of this blog post, but fortunately there is excellent documentation. Once you've played with the official build, you can get a JIT-enabled build (there's an "all Power Macs" and a G5-specific version with different compiler settings) from the repository I set up at SourceForge. This uses a separate preferences file which is included with some default settings. Out of the box frameskipping is disabled, which is appropriate for pretty much any G5 system from 2GHz on up with most titles. If you're using a G4 or slower G5 system, edit this file and change frameskip=0 to frameskip=1 or frameskip=2 (my 1.25GHz iMac G4 needed frameskip=2 as a minimum, but an MDD or 7447 might be okay with a frameskip of 1). You should use OpenGL as your output if at all possible for maximal hardware assistance (which is the default in this file); rendering to a surface in software is rather slower. Copy it to ~/Library/Preferences and start playing your classic DOS games with Power.

No warranty for this build is expressed or implied and this may be the only build I ever offer. There are known bugs in this build which Mac builds from the SVN trunk have too and thus I have not attempted to fix them. The patch is included so you can roll your own; these preconfigured builds are merely offered as a convenience and to make more fun games practical on your already fun Power Mac. Eventually I'll rewrite this for ppc64le so my Raptor Talos II can play with Power too.

Posted by ClassicHasClass at 11:25 PM

Email ThisBlogThis!Share to TwitterShare to FacebookShare to Pinterest
Labels: anfscd