The new Overbite Android (works with Firefox Android too): Gopherspace on your mobile Android device

Since this blog is syndicated to Planet Mozilla and I periodically post Mozilla- and Firefox-relevant posts, here is another: if you still dwell in Gopherspace and use OverbiteWX and OverbiteNX on desktop Firefox, Overbite Android has been updated to full Android Q compatibility so you can use it with Android Firefox as well. Instead of an add-on, just sideload the .apk, and whenever you tap a Gopher URL in Firefox it will automatically load in Overbite Android so you can seamlessly jump back and forth. (Or Chrome, I guess, but who uses that?)

Naturally Overbite Android works just fine as a standalone application and responds to any gopher:// intent sent by any other activity, including Firefox. However, this latest version has been updated specially for Android Q support, including dark theme: 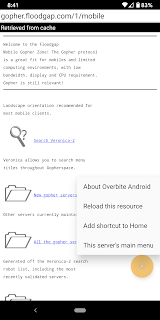 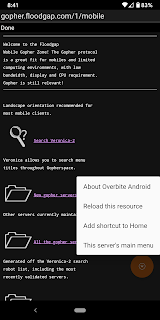 I also purged a lot of the old API usage, replacing it with a more Material Design-style UI, an actual address bar you can edit for a change, and a dynamic menu off a floating action button (as opposed to the old school Menu button menu, support for which was removed from Android Q). There are also fixes to scrolling and zooming, and you can still generate and drop shortcuts on your Android launcher as bookmarks. 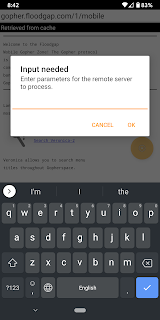 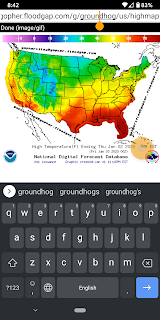 Now that I've gotten off my butt and converted it to Android Studio, I suppose I should start working on download support again but everything else (including searches) functions just dandy.

Overbite Android is offered to you under the BSD license and supports 4.0 (Ice Cream Sandwich) through 10 (Q). You can get it, the Android Studio project and source code, and all the rest of the Overbite gopher client family from the Overbite website or directly from Gopherspace.

Posted by ClassicHasClass at 9:13 PM

Email ThisBlogThis!Share to TwitterShare to FacebookShare to Pinterest
Labels: gopher