TenFourFoxBox: because it's time to think inside the (fox)box. (a/k/a: we dust off Mozilla Prism for a new generation)

As long as there have been web browsers, there have been people trying to get the web freed up from the browser that confines it, because, you know, the Web wants to be free, or some other similarly aspirational throwaway platitude. These could be robots, or screen scrapers, or aggregating services, or chromeless viewers, but no matter what these browserless browsers are doing, they all tend to specialize in a particular site for any number of reasons usually circulating around business or convenience. This last type, the chromeless viewer, spawned the subcategory of "site specific browsers" that morphed into the "Rich Internet Application" and today infects our phones and tablets in the guise of the "lazy-*ss programmer mobile app."

Power Mac users have only had access to a few tools that could generate site-specific browsers. Until Adobe withdrew support, Adobe AIR could run on PowerPC 10.4+, but it was more for generally Internet-enabled apps and wasn't specifically focused at creating site-specific browsers, though it could, with a little work. Leopard users could use early betas of Fluid before that went Intel-only, and I know a few of you still do. Even Mozilla themselves got into the act with Mark Finkle's WebRunner, which became Mozilla Prism in 2007, languished after a few releases, got moved to Salsita and renamed WebRunner again in 2011, and cancelled there as well around the time of Firefox 5. However, WebRunner née Prism née WebRunner was never available for Power Macs; its required binary components were Intel-only, even though the Mozilla releases could run on 10.4, so that was about it for PowerPC. (Mozilla tried again shortly afterward with Chromeless, but this didn't get off the ground either, and was never intended as a Prism successor in any case. Speaking of, Google Chrome can do something similar, but Chrome was of course never released for Power Macs either because Alphagooglebet are meaniepants.)

There are unique advantages as TenFourFox users to having separate apps that only handle one site at a time. Lots of tabs requires lots of garbage collection, the efficiency of which Mozilla has improved substantially, but is still a big drain on old computers like ours which are always under memory pressure. In addition, currently Firefox and TenFourFox must essentially cooperatively multitask between tabs because JavaScript infamously has run-to-completion semantics, which is why you get the "script too long" dialogue box if the watchdog portion of the browser detects something's pegging it. Since major portions of the browser itself are written in JavaScript, plus all those addons you tart it up with, the browser chrome must also cooperatively multitask with everything else which is why sometimes it temporarily grinds to a halt. I've sunk an incredible amount of time over TenFourFox's existence into our just-in-time JavaScript compiler for PowerPC to reduce this overhead, but that only gets us so far, and the typical scripts on popular websites aren't getting any less complex. Mozilla intends to solve this problem (and others) with multi-process Firefox, also known as Electrolysis, but it won't work without significant effort on 10.4 and I have grave doubts about its ability to perform well on these older computers; for that reason, I've chosen not to support it.

However, generating standalone browser apps for your common sites helps to mitigate both these problems. While each instance of the standalone browser uses more memory than a browser tab, with only one site in it garbage collection is much easier to accomplish (and therefore faster), and the memory is instantly reclaimed when the standalone browser terminates. In fact, on G5 systems with more than 2GB of RAM, it helps you actually use that extra memory more effectively: while TenFourFox is a 32-bit application (being a hybrid of Carbon and Cocoa), you'd be running multiple instances of it, all of which have their own 32-bit address space which can be located in that extra RAM you've got on board. Also, separate browser instances become ... multiple processes. That means they preemptively multitask, like Electrolysis content processes would. They could even be scheduled on a different core on multiprocessor Power Macs. That improves their responsiveness substantially, to say nothing of the fact that the substantially reduced amount of browser chrome has dramatically less overhead. Now, standalone browsers also have disadvantages; they lack a lot of the features of a regular browser, including safety features, and they can be more difficult to navigate in because of the reduced interface. But for many sites those are acceptable tradeoffs. 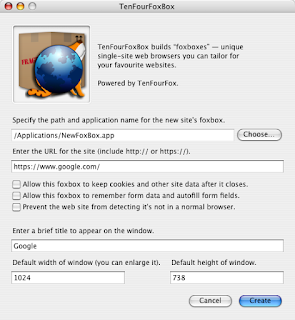 TenFourFoxBox is an application that generates site-specific browsers ("foxboxes") for you, running them in private instances of TenFourFox (a la XULRunner). This has been one of my secret internal projects since I got Amazon Music working properly with TenFourFox, so I wanted to use it as a jukebox without dragging down the rest of the browser, and to help beef up the performance of my online coursework site which has a rather heavy implementation and depends greatly on Google Docs and Box. And now you'll get to play with it as well.

Although TenFourFoxBox borrows some code from Prism/WebRunner, mostly the reduced browser chrome, in actual operation it functions somewhat differently. First, TenFourFoxBox isn't itself written in XUL; it's a "native" OS X application that just happens to generate XUL-based applications. Second, for webapps created with Prism (or its companion tool Refractor), it's Prism itself that actually does the running with its own embedded copy of the XUL framework, not Firefox. With TenFourFoxBox, however, foxboxes you create actually run using the copy of TenFourFox you have installed (and yes, the foxboxes will look for and run the correct version for your architecture), just as separate processes, with their own browser chrome and their own application support and cache directory independent of the main browser. The nice thing about that is when you upgrade TenFourFox, you upgrade the browser core in every foxbox on your system all at once, as well as your main browser, because TenFourFox is your main browser, amirite?

The implementation in TenFourFoxBox is also a little different with respect to how data is stored. Foxboxes are driven essentially as independent XULRunner apps, so they have their own storage separate from the browser. Prism allowed this space to be shared, but I don't think that was a good idea, so not only are all foxboxes independent, but by default they operate effectively in "private browsing" mode and clear out cookies and other site data when they quit. By default they also disable autocomplete, improving both privacy and a little bit of performance; you can, of course, change these settings, and override checks sites might do which could detect you're not actually in a regular browser. I also decided to keep a constant unchanging title (regardless of the website you're viewing) so that you can more easily identify it in Exposé.

So, let's see it in action. Here's Bing Maps, in full 1080p on the quad G5, looking for drone landing sites. 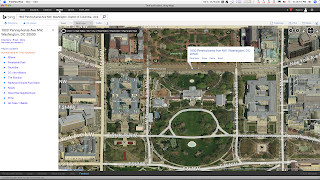 And here's what I originally wrote this for, Amazon Music, playing the more or less official album of International Space Year: 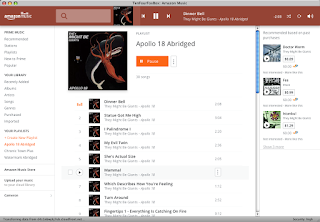 (Stupid Amazon. I already have Flood and Junta!)

So now it's time to get this ready for the masses, and what better way than to have you slavering lot mercilessly bang on it? The following bugs/deficiencies are known:

Even the manual is delivered as a foxbox, which makes it easy to test on your system. Download it, try it and post your comments in the comments. TenFourFox 38.4 or higher is required. This is a beta, so treat it accordingly, with the plan to release it for general consumption a week or so after 38.5 comes out.

Let's do a little inside-the-box thinking with an old idea for a new generation, shall we?

Posted by ClassicHasClass at 11:16 PM

Email ThisBlogThis!Share to TwitterShare to FacebookShare to Pinterest
Labels: tenfourfoxbox