The 31 launch went off mostly without a hitch, though the interface has jarred a few people because almost all of the vestiges of the old pre-Firefox 4 interface are now gone. However, the overall improvements in 31 I think do ultimately exceed its drawbacks.

The only significant non-cosmetic issue right now is issue 283, which made trackpad and Mighty Mouse scrolling abnormally slow (scrolling with the scroll bar or with a regular USB mouse scrollwheel works fine). This was because of a workaround for Lion code that didn't take account of the right selector. If you have a PowerBook or iBook affected by this, there is a test build available for you (7450 only). This appears to fix the problem and will be officially part of 31.1.

The test build also has the patches from issue 284 which fix certain rendering errors and improve performance with extra-tall gradients and/or opaque background scrolling. These are part of Firefox 32+ but they're not going to be backported to ESR, so I went ahead and adapted them since they do affect our primarily software-based graphics stack and they will also be in 31.1. You're welcome to try it on a 7450 system if you like; I didn't bother making other test builds since the only systems supporting trackpad scrolling are the late-model PowerBooks and iBooks, all of which are 7450-series G4 CPUs.

In the propaganda department, I picked up this rare but classic poster from kootenaymac (who also has a link to TenFourFox, thanks!; saturation up since the lights washed the photo out a bit): 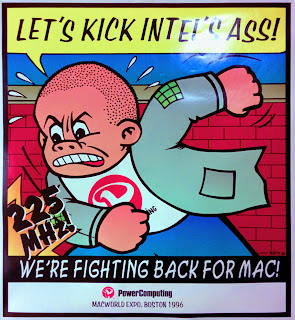 For those of you in the younger set, you may not remember how aggressive Power Computing was back in the day, probably the most successful and certainly the most visible of the doomed Mac clone companies. Steve Kahng was notorious for beating Apple to the fastest PowerPC chips because of his history with IBM from his Leading Edge days (remember those?), introducing the 225MHz 604e PowerTower Pro in July 1996 which was faster than any other personal computer at the time. Apple could not beat it until the 300MHz 8600/9600 in 1997, and I think that's what scared Cupertino the most; Steve Jobs bought them out and cancelled the license when he returned to Apple. Power Computing even had a laptop ready to go, and G3-based systems, none of which Apple ever let them release.

Their marketing was as controversial as their sales tactics and as impactful as their technology -- lots of paramilitary themes, handguns and of course Sluggo, all done by artist Frank Kozik and engineered by marketing "weasel" Mark Rosenfelt. The Sluggo poster bought them a famous lawsuit from the original artist when it showed up at MacWorld Expo 1996 in Boston, and PowerComputing lawyers made the floor staff take down the posters and stop handing them out. So, of course, it's my favourite of a great number of great ads, and I'm delighted to finally own one because there are very few out and about. It's hanging in my server room with space for the G5 poster they're sending me too.

I put Sluggo as an easter egg in early versions of Classilla and since then every release of TenFourFox has had a version, updated for the times. See if you can find it. (Don't spoil the surprise in the comments!)

I'm planning to see how viable 33 is next week, and I'm working on the annual statistics post in the meantime, because I have no life.

Posted by ClassicHasClass at 1:22 PM